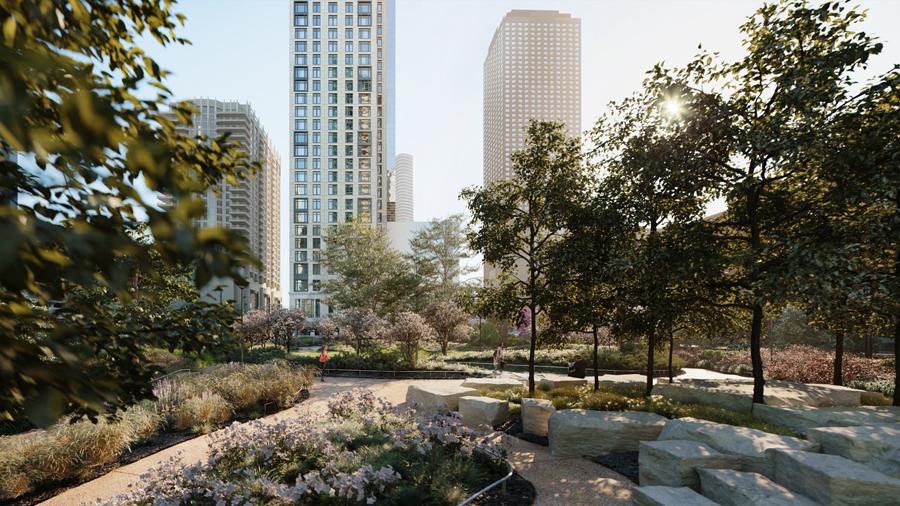 Bennett Park in Chicago reflects multifamily developers’ increasing desire to provide green space for use not just by residents, but the public at large.

In this era of luxurious apartment community amenities, multifamily developers battle to top each other in devising new common-area extras, from poolside cabanas to state-of-the-art golf simulators. They’re very aware today’s renters are willing to sacrifice private space for spectacular public areas that foster a spirit of community with their neighbors.

What developers have not done is shown an inclination to furnish common-area amenities for folks other than their residents. That is, they haven’t until now. Some are now going beyond their own borders to carve out spaces serving the public at large.

Intended as amenities for new rental communities, the spaces are often colored green and take the form of new public parks where the communities’ residents can enjoy a small oasis of nature in the center of an urban environment. Significantly, they are not limited to residents but open to all. Landscaped plazas and pedestrian walkways featuring benches and even water features lure residents outdoors to mingle with their fellow residents and city dwellers. The result in a city like Chicago is a much-needed boost in public green space, from the unlikely benefactor of the developer community.

Now open to the public, the initial phase delivers such refinements as a water feature and sculpture. They offer much-needed contrasts in an enclave where restful park-like settings are hard to locate amid concrete and asphalt. By the time the public space is completed in 2019, the public plaza will add function to form, furnishing a long overdue pedestrian walkway linking Division Street with Milwaukee Avenue.

“Multifamily developers are increasingly seeing the value in including public space that serves the community at large, as our industry understands that being a good neighbor is important to create a true community,” says John McLinden, managing partner at Hubbard Street Group. “We’re taking an active role in helping evolve spaces into places that serve as an extension of the neighborhood through adopting more aspects of placemaking to strengthen the connection between people and the places they share.”

Run on the banks

After more than a century of being repelled by it, Chicagoans are returning in droves to their riverfront. And everyone from high-rise developers to ethnic eatery entrepreneurs are descending on the Chicago River to capture some of the spending of river-bound residents.

Developer Lendlease’s Southbank will forge an entirely new neighborhood development on seven acres along the Chicago River’s South Branch between the South Loop and the city’s Chinatown district. The first of a quintet of planned residential high-rises, The Cooper at Southbank will be located on new two-acre Southbank Park. The green space, being designed by the Windy City’s own Hoerr Schaudt Landscape Architects, will offer a public riverwalk, kayak launch and walking paths. A new water taxi stop at the property’s southern tip will link Southbank to the Loop north, and Chinatown south.

A bit north, in the city’s Streeterville neighborhood just east of the Magnificent Mile, forests of high-rise buildings can obscure the fact Lake Michigan and the Chicago River are only a few blocks away. That makes this exclusive enclave an ideal candidate for a new park. Developer Related Midwest is responding to the need with 1.7-acre Bennett Park, next to its new 70-story all-residential tower One Bennett Park.

The park has been given an impressive pedigree, having been designed by Michael Van Valkenburgh Associates, which created two comparatively recent Chicago gems, Maggie Daley Park just east of Millennium Park, and the 606, a linear park stretching across the city’s Near North and Northwest Sides.

Bennett Park is slated for completion in the middle of 2019, and when finished will offer a children’s playground, two dog runs, central lawn bowl for public gatherings, winding pathways and groves of shade trees. Though privately owned and operated, Bennett Park will be fully open to the public during Chicago Park District hours of operation.

This article was written by Jeffrey Steele from Forbes and was legally licensed through the NewsCred publisher network. Please direct all licensing questions to legal@newscred.com.

Related Topics
January 21, 2021
Rebuilding your finances after divorce
by Kate Stalter
January 14, 2021
How parents can help their kids build good credit at any age
by Motley Fool Staff
January 07, 2021
How to talk with your parents about their estate plan, even if they don't want to
by Liz Knueven